The content of video speech of Al-Zawahiri, released in the eve of the 15th anniversary of the Twin Towers attack, is keeping the AQ communication model, revealing a wide and distinctive political strategy.

His warning (“As long as your crimes continue, then the events of Sept 11 will be repeated a thousand times, Allah permitting”) plays as a perpetual sentence and a continued reappropriation of that attack.

He declares that “The anniversary of 9/11 that gladdened the hearts of the believers irked the infidels. May Allah accept its planners and executors, with the apple of our eyes, Sheikh al-Mujahideen Osama Bin Laden on top of them.” Interestingly, he makes a general reference to “planners and executors” maybe with the intent to consolidate some networks (al-Nusra?), as oulined as well by his call for jihadists unity.

But the most strategical message is the invitation to African Americans to convert to Islam as to save themselves from American laws, controlled “by the white majority”, misusing the image of Malcom X.  A call that comes just when racial tensions are particularly heated in the USA and are at the heart of the political debate. 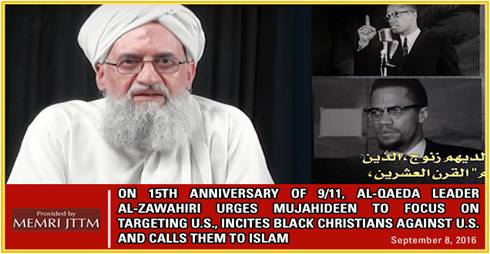